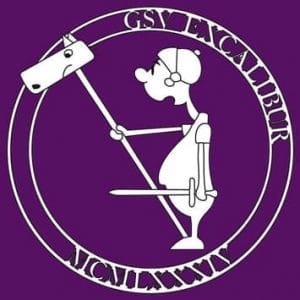 History of the Assocation

The history of GSV Excalibur takes us back to the sixties. Although many History students can’t imagine this anymore, there was a time where History students were obligated to become a member of the Nijmeegsch Studenten Corps (NSC) Carolus Magnus and the faculty sub-association of the corps, the Nijmeegse Historische Studentenkring (NHSK) Dr. Huybers. (After dr. H.F.M. Huijbers, the first professor of Modern History at Radboud University and an expert on the sixteenth century). The sixties, however, were also a time when the amount of History students grew exponentially. Also, there was a growing leftist student emancipation movement, which lead to demonstrations and occupations. This zeitgeist didn’t fit in the character of the social club NSHK and thus the former board members decided to disband the association. After the disbandment there was a certain emptiness for the History student in Nijmegen with regard to an active student association.

This emptiness came to an end when on the historical date of February 29th 1984, a couple of enthusiastic students, among whom Frank Meulendijks and Hans Marcelis, founded the Geschiedenis Studenten Vereniging. The GSV was not to be a fraternity but a study association with an open and democratic character. There was to be a wide range of activities, both study and leisure-related; among which parties, travels, lectures and films. Also, the well-known Historisch Institutioneel Tijdschrift (HInT) was founded as a magazine for history students. The accessibility of the GSV was starting to pay off. After just a week the GSV already had 200 members.

Since then the GSV has kept growing steadily: today she has some 650 members and donors. Every year the GSV has a new board which dedicates itself to the liveliness, development and growth of the Association. Many discussions have been held concerning the public image of the GSV, the in-crowd issues and the male to female ratio. All this has contributed to the character of the GSV as we know it today. When the GSV was three years old, it got its current name: GSV Excalibur. This was the winning name which Dr. P. Bange (Medieval History) had suggested in the competition of the HInT.

The open and versatile character of the association still exists and will continue to exist. A wide range of activities, from drinks, parties and a prom, to readings, travels, debates and a congress, are being offered to all members. And where one used to find members in café Groenewoud or café Het Haantje, nowadays the well-known woensdagavondborrel (Wednesday evening drink) is in café Camelot at the Grote Markt. Here up to the present day enthusiastic GSV members come together to enjoy a nice drink and to relax with their friends within the GSV.